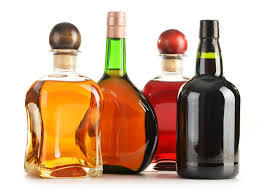 Maybe I'd better stop referring to it as "Spirits", and just go ahead with "alcohol" or maybe even "booze". At any rate, it will include a rare collection of tipplers from all over the known world. Hopefully, I won't sabotage myself by talking way too much about the cup that cheers. Once again, friends, I swear to you that my palate has been clear of both vino veritas and the other kind for a decade and counting. The gab, however, remains, so I can tell you that the first of Van Morrison's songs is titled Stop Drinking and the album on which it's featured is What's Wrong with This Picture? Leave it to the Celtic crowd to come up with such surprises.

I've been accused of featuring far too many songs about whiskey in this show. Nonsense! I've included plenty of anti-whiskey material, like Whiskey, You're the Devil by the Clancy Brothers. Rumor has it, by the way, that at least one of these chaps is thinking very hard about abandoning the vile substance. And, to introduce some of the U.S.-made songs in the genre, be sure to listen for Whiskey Blues (Sittin' Here and Drinkin') by the great bluesman Muddy Waters. Or, to go directly to Ireland for a sample of the night's entertainment, we'll have the Pogues with the ominously titled I'm a Man You Don't Meet Every Day, featured in the album which is said to be a historic commentary on what has fueled the British Navy since Time Immemorial, Rum, Sodomy and the Lash. Finally, prepare to give a listen to Jerry Garcia and David Grisman get together for Whiskey in the Jar from their Shady Grove album and the Magnetic Fields explain how Love Is Like a Bottle of Gin.

Let it never be said that there's not lots to learn in a Something Completely Different show. Salute'!!