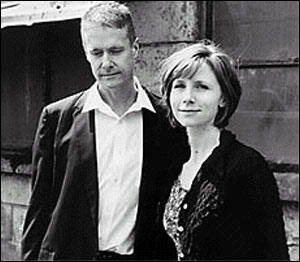 Now... I'm no musical historian, so I can't recite chapter, verse, birthdate, religion of baptism, extent of education and all that stuff, so... for what it's worth... the groups are:

The Duke and the King. Two people, as you can see, though other musicians accompany them, the whole bunch hailing from upstate New York, with a strong connection to The Felice Brothers. Of Italian extraction, of course, so they gotta be good. Songs about Hell, the Hudson River, Union Street (not the San Francisco one), Summer Morning Rain, and so forth.

Kieran Kane, Kevin Welch & Fats Kaplin. A trio of terrific instrumentalists, singers, and sterling songsmiths (at the risk of alliteration). They address issues such as being too old to die young, not being able to save everybody, working for the man again and (somewhat coincidentally) Hell. You can see where this is trending. In my case, it's the result of Roman Catholic education...twelve years of it.

Dave Carter and Tracy Grammer. They had a pretty short career, brought to an abrupt close by the passing of one of them. Listen for When I Go, the first of their songs that get played, and one of the all-time great songs about passing. Listen for Love, The Magician, Merlin's Lament, Workin' for Jesus and all the others, too. These are the genuine poets of the crowd.

So that gives you some idea of what it'll be like to spend Friday evening, August 3rd (August already! Can you believe it)? 8 to 10 pm, on KRCB. Listen, it's bound to be Something Completely Different.