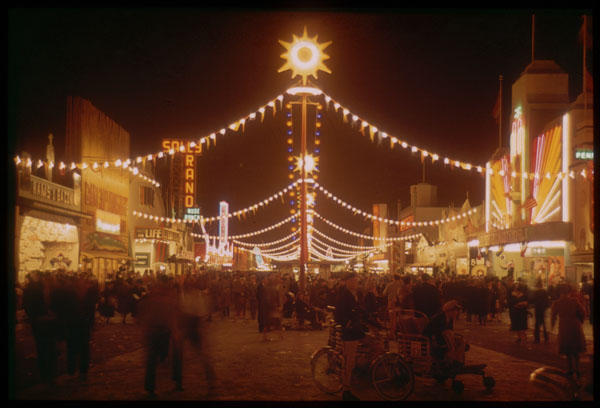 ..maybe...sixty years...no, seems longer than that, I think...let's see...sixty-five...or six or...make it an even 70 years! Wow! I can't think of anything that seems longer ago than that to me. Wait a minute! Except for going to the 1939-40 World's Fair on Treasure Island. I remember standing in the back seat (seat belts? are you kidding?), completely small enough to stand upright on top of the driveshaft hump, and seeing the magical city getting closer and closer as our 1936 Plymouth 4-door cruised down the road leading from the Bay Bridge. I don't remember it really well, but it's definitely there in my long-term memory. So this means I have to delay the broadcasting of the third segment of the Thank You, Music Makers series and do a show called "December 7th? Oh, oh!", all about Pearl Harbor and all that.

Wait a minute. What about "all that"? Well, it'll be music, I guess. I know! It'll be the music that won World War II. For who? For US, of course. I remember a dusty little cardboard box of CDs that I bought at a yard sale back in the distant past. Of course, these were CDs which had been re-recorded from the LPs, which had been re-recorded from the 78s. Lucky they got re-recorded, because I don't have anything that will play 78s, and haven't had for many, many years. Too many. Way too many! Yikes!

Well, I looked at these CDs, and the first one was by Spike Jones. Remember him? Spike Jones and His City Slickers? And check out the title: Der Fuehrer's Face. That used to be great fun, laughing at Hitler. And here's The Almanac Singers! Woody Guthrie, Pete Seeger, all that crowd, singing Round and Round Hitler's Grave. And check out these great names of the past: Big Crosby and the Music Maids, Perry Como, Glenn Miller and all those other famous Big Bands, who gave up playing swing dance music for three or four years to musically win the war. All the parents and kids gathered around the radio to listen to The Hit Parade! And hey! It worked! We really did win that war.

Hmmm. Seems like we've had wars going on for years, like the war in Afghanistan has been going on longer than any other American war. You know, what we ought to do is turn the musicians loose on these wars and stop each one of them, before it even gets started, through the power of music. I bet they'd do a lot better than the politicians or the military officers or that guy with the orange hair. Join me next Friday, 8 to 10, on KRCB, Norcal Public Media. We've just gotta stop these wars!