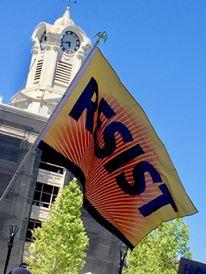 After substantial grumbling over the actions of Trump (Not My President), it appears that the citizens of this country are not about to let the immigrant children slide. There are actions of this sort all over the United States today, and even in other countries, I believe. Are we really fed up enough to demand justice, no matter how much we're stalled and double-talked and blatantly lied to? I hope so, so I'll proceed as though it were a done deal.

The July 6th Something Completely Different show is unique in having a title that's one word only. No "somethings" or "completelies", just "Child.” And "Child" is dedicated to those kids that you hear sobbing and crying out in the crowds who have been forcibly separated from their parents. This treatment is absolutely reprehensible, and it's not going to stop, as more and more families leave their home countries, realizing that to continued living in these places is to risk death on every hand.

I'm not going to preview this show as I usually do. You may be sure, though, that you'll be profoundly affected by what you hear. And I'm hoping that effect will lead to raising many American voices in outrage. Hopefully, those voices will lead to action, because there's no excuse that will allow us to ignore what's going on, here in the Land of the Free, here in the land whose iconic monument raises a torch at the gateway to the New World. "Give me your tired, your poor...", the monument reads for us, "Send them, the wanderers, tempest-tossed to me. I lift my lamp beside the golden door." You know, we can't pretend that those words don't apply any more, or that they've been cancelled by Donald Trump, or that there was an error in translation. They're still there, still very real, still heart-felt, and we still carry the obligation to make them true.

So please listen to "Child.” Do what you're moved to do. Listen to the children's cries, wherever you hear them. Act as you know you must. These are the times that try men's (and women's) souls. You're living in them. Thanks.