caption
Courtesy of the artist 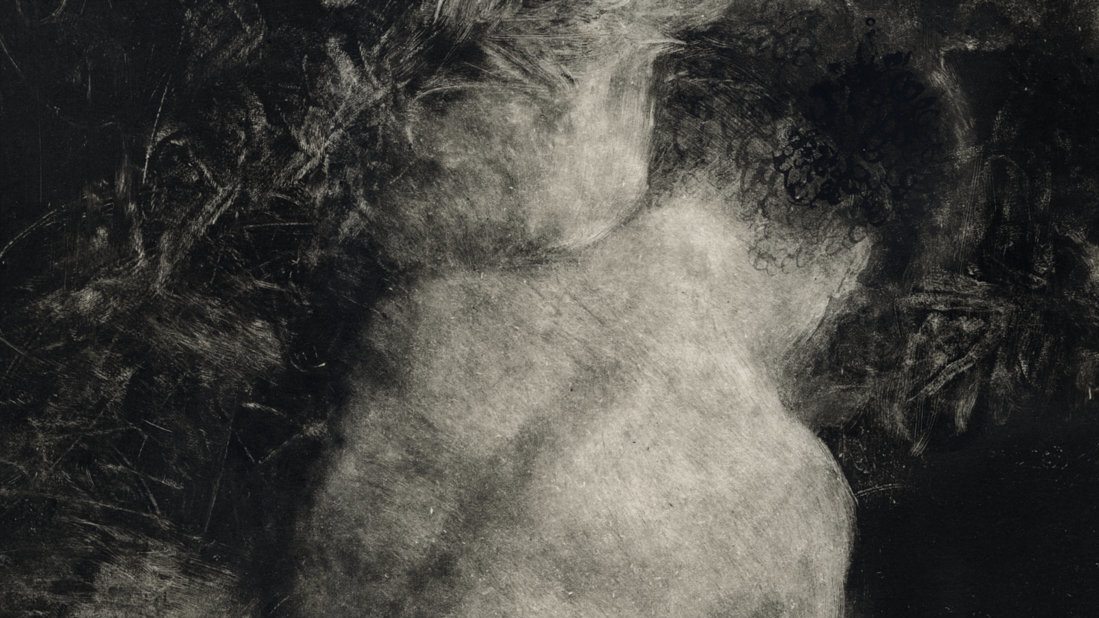 "Nothing to be done."

Estragon's opening line from Waiting for Godot has been spooling around like a tape loop, decaying yet cacophonous, in my head all week. Revisiting a dog-eared copy from high school, Samuel Beckett's play reads like the same piece of music played in two noise-canceled rooms — we the audience experience a melody waver in discord, briefly align, turn out of sorts, and on and on.

Yes, I am feeling a little nihilistic lately, why do you ask? It's not even the isolationism — though that's going to feel pretty raw in due time — that sets me on edge. There's a volcano gushing hot garbage, from spring breakers who don't think they can spread the coronavirus to politicians who hem and haw about whom to protect, corporations or people. Reasonable folks may seek out soothing music to calm the torrid soul, but this soul needs hate-spewing black metal to meet my rage.

To that end, Feminazgul's No Dawn for Men is a viciously beautiful piece of feminist black metal. Laced with violin, theremin, accordion and piano, Margaret Killjoy's arrangements are simultaneously billowing and sparse — even, at times, disconnected. And as unsparing as the band's dark hymns are towards patriarchal systems — "I was not made to be gracious," Laura Beach screams, "I will carry this hatred / I will carry this hatred to my grave" — No Dawn for Men casts a triumphant spell.

Serpent Column quickly follows up last year's Mirror in Darkness with 22 minutes of raw antipathy toward all humankind. Endless Detainment — ever the 2020 mood — strips previous avant-garde contortions to a rough-hewn savagery, almost like Allen Ginsberg in corpse paint, as Serpent Column approaches these songs with a blackened "first thought, best thought." The riffs, the drums and the screams all blast with blazing speed — no room for noodling, just relentless pandemonium.

As much as these records help equalize an angry disposition towards humanity, there's the other side of Godot's coin to consider: Fans are supporting artists — pretty much all of whom are currently unable to tour — through virtual concerts and music purchases. Communities are building mutual aid networks. We sing karaoke with friends via Zoom. There's another message within Beckett's despair: Beware the man who says, "Nothing to be done."

You can find this week's picks below — not all black metal, I promise — plus my updated playlist on Spotify and Apple Music. (Note: Some of these tracks can only be found on Bandcamp.)

We Versus The Shark, "Righteous Vibes"

In the early 2000s, We Versus The Shark inspired an unexpected math-rock scene in Athens, Ga., a college town known for experimental psych-pop and, well, college rock. The band morphed from dance-punk-riddled Dismemberment Plan acolytes to hurling Brainiac skronk in six years' time (and caught Carrie Brownstein's eye at SXSW) before breaking up in 2009.

Over a decade later — with members scattered across the east coast and now in bands like Man Or Astro-Man?, Sunwatchers, Bit Brigade and Double Ferrari — We Versus the Shark returns with Goodbye Guitar, out June 19. The band still sports a ferocious dynamic with tangled, burly riffs galore, but it's a lot more of a fist-pumping, wham-bam rock and roll record than expected.

When you really need to get into your feels, this Russian producer slows Burial's downtempo mope-step to a single tear, falling at 240 frames per second.

The hum of the earth stretched across latitudes of glitched guitar fuzz and droning folksong. A celestial communion with roots in the Earth.

With the technical finesse of a power trio, Control Top slams a psychedelic dance-punk appetite for destruction.

Jeremiah Cymerman can simultaneously coax mourning and terror out of a clarinet like no one else. Electronics gurgle and scrape throughout, but Cathedral captures the ache and the screaming quietude of his instrument with eerie intimacy.

Cosmic country with a gentle sweetness, reminiscent of Beachwood Sparks and Silver Jews at their twangiest. The pedal steel follows the loping melody with an ambient touch, as if to smooth out the skyline.

Baltimore's Horse Lords must know that groove lives not only in the heart, but stretches into the whole, rapt-electric being. Albert Ayler-ian skronk, Saharan desert trance, freak punk and microtonal guitar workouts exercise a body music hypnosis.

Even when someone else sings, you know it's a Beauty Pill song. Chad Clark's turns of phrase are irregular, yet immediately memorable; his lyrical cadence is clever, yet homey and even funny. Post-Describes Things As The Are, Clark's densely textured music has caught up to his wordplay. After horns and strings swim with pulsing electronics, new member Erin Nelson sings (she also dances in this video), "I live inside my own heart, Matt Damon." Same.