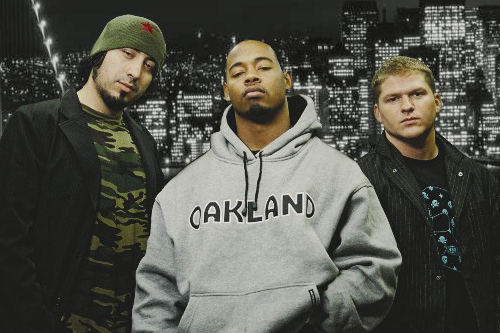 This week on Art of the Song we explore the music and mission of FlipSyde. Mixing together rap, guitars, political awareness, and introspection, the Bay Area's Flipsyde utilize their diverse backgrounds to create ambitious, soul-stirring music. MC Piper & I met during an 8-day course led by Anna Deavere Smith along with 30 other attendees explored the power of story to create connection and positive change.

Piper was born to an American mother, Brazilian father, and learned Portuguese growing up. Vocalist Steve Knight was born in Alabama and did a tour of duty in the U.S. Coast Guard. Guitarist Dave Lopez originally fled to the U.S. from Chile as a kid in search of a better life. In 2003 the guys found each other in Oakland Piper and Knight had been working on a song called "Someday." When Dave heard it he couldn’t resist grabbing his guitar and turning it into a jam, which turned into a band, which became Flipsyde.