Two Sonoma County nonprofit conservation groups, Sonoma Land Trust and LandPaths, have announced the creation of a new 554-acre nature preserve on the Bohemia Ranch located between Occidental and Monte Rio near Camp Meeker. The forested land adjacent to the famous Bohemian Grove contains a waterfall, camping potential and fields of rare plants. The new preserve, named the Bohemia Ecological Preserve, was created through the purchase of a conservation easement by Sonoma Land Trust and a pending donation of the restricted land by Ted and Phyllis Swindells to LandPaths, which will manage the property for resource protection and public use.

“It is inspiring to see two of our leading land organizations ­— Sonoma Land Trust and LandPaths — come together to craft a deal that will not only protect this spectacular property for all time, but also ensure that the public has access to it without burdening our parks budget,” said Sonoma County Fifth District Supervisor Efren Carrillo.

Bohemia Ranch has long been sought by West County residents as a park. In the late 1990s, Grateful Dead drummer Mickey Hart headlined a benefit concert to raise money for a purchase, but the property was sold with some conservation restrictions. A second effort to create a county regional park in 2010 faltered as funding diminished.

It was then that a collaboration formed between the nonprofit organizations­­, Sonoma Land Trust and LandPaths — ­and the Swindells and the W. Parish family (which was interested in purchasing a portion of the ranch) ­— to explore the idea of an accessible preserve on a portion of the ranch.

“These times with uncertain public funding push us to be creative,” said Ralph Benson, Sonoma Land Trust executive director. “While it won’t be a public park, much of the land will be opened to public use by LandPaths. LandPaths has extensive experience in connecting people with the land and will be an innovative steward of this special property.” 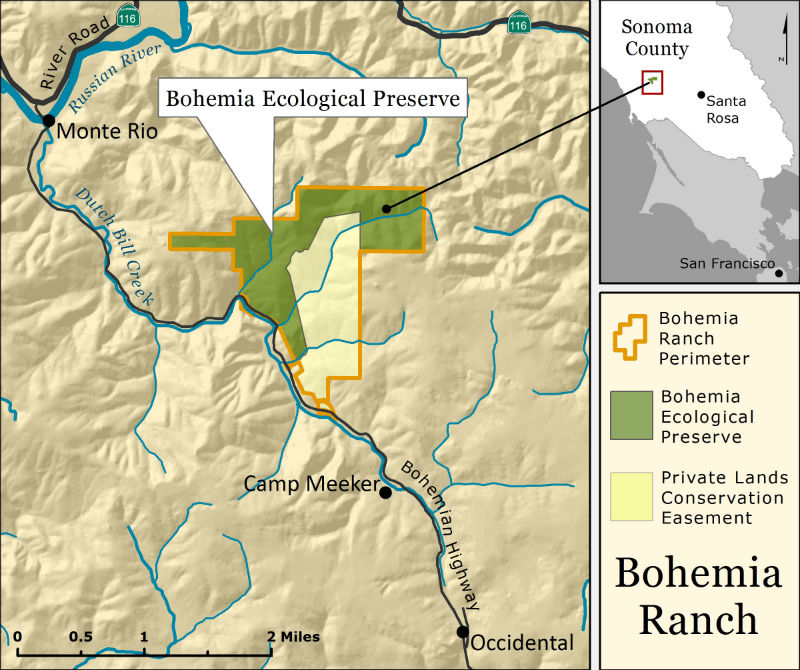 Sonoma Land Trust purchased the conservation easement that extinguished the development rights over four parcels of land totaling 554 acres for $1.45 million. Purchase funds were provided by the Gordon and Betty Moore Foundation. The Parish family purchased 352 acres of the ranch and agreed to work with LandPaths to provide trail access across a part of their private land and to cooperate in the management of a shared watershed. The Swindells and the Parishes have pledged to provide $100,000 in seed funds for the management and stewardship of the preserve.

“Once again, the Sonoma Land Trust has found an innovative way to protect a very special and beautiful part of Sonoma County,” said Craig Anderson, LandPaths executive director. “We are grateful for the opportunity to both introduce ­— and in many cases — reintroduce people to this stunning landscape in the coming months. I have great faith that the West County community and beyond will get engaged in this effort for the long term.”

While Bohemia Ranch has long been known for its year-round waterfall, it also harbors a wealth of natural resources. A variety of habitats, including biologically diverse forestlands, riparian woodlands and rare serpentine communities, support a wide array of plant and animal species. The serpentine soils, creeks and varied terrain contribute to the presence of unusual plant species, including Pennel’s bird’s beak (which is federally listed as endangered), Baker’s manzanita, Crystal Springs lessinga and serpentine reed grass. The habitat types found on the property support a wide range of birds and wildlife, such as osprey, pileated woodpecker, northwestern pond turtle and dusky-footed wood rat. Species of special concern on the preserve are the northern spotted owl and steelhead trout, both federally threatened.

About the Sonoma Land Trust

Since 1976, the Sonoma Land Trust has protected nearly 27,000 acres of scenic, natural, agricultural and open land in and around Sonoma County for future generations.