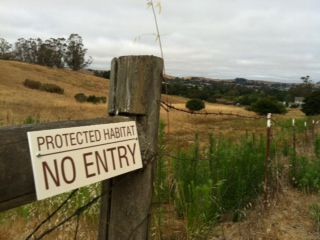 American Badgers, tenacious, rarely seen creatures, have found friends in Petaluma. For the past 12 years members of the non-profit Paula Lane Action Network have sought to protect an 11-acre plot of land on West Petaluma’s Paula Lane. This spring they got the help they needed, a matching grant from the Sonoma County Agricultural Preservation and Open Space District to purchase the land and dedicate it as a natural preserve.

Badgers are important predators, hunting rats, moles, gophers and California ground squirrels. Their burrows (see below) also provide homes for other animals such as the California tiger salamander, red-legged frogs, burrowing owls and foxes. However their habitat, generally hilly grasslands, has been dramatically impacted by development and their populations are declining. 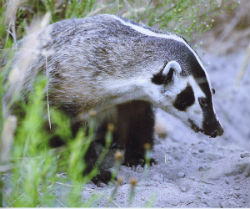 Possibly because of their rare and elusive nature, badgers aren’t often in the public mind. The political will to protect them is thin to nonexistent, says Susan Kirks of the Paula Lane Action Network. The new preserve in Petaluma will, Kirks hopes, help school kids and the public learn to love their hardy, little-seen neighbors.