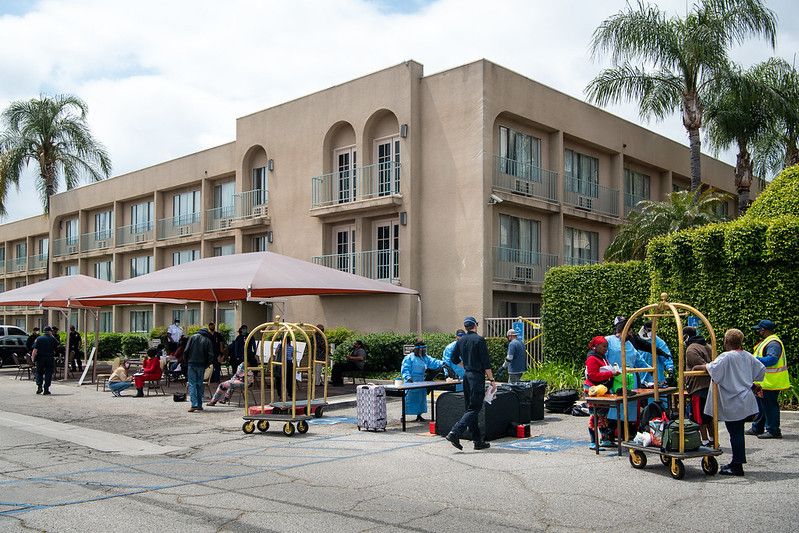 With a forecasted deficit of near-record proportions and an economy in freefall, homelessness and low-income housing advocates were braced for painful cuts in the revised budget proposal Gov. Gavin Newsom unveiled Thursday.

But unlike some of the more severe pandemic-induced rollbacks Newsom outlined in areas like education and climate change, affordable housing and homelessness dollars were mostly spared from the administration’s fiscal cleaver.

Given an assist from the federal government’s March stimulus package, Newsom is proposing $750 million to buy hotels and motels currently used for emergency homeless housing, hoping to turn the properties into more permanent solutions. Another $500 million in tax credits for building low-income housing was preserved from Newsom’s pre-pandemic budget plans — a major win for affordable housing developers as they try to fill the state’s shortage of 1.3 million low-income homes.

But while Newsom’s housing and homelessness budget was rosier than some had expected, the proposals still leave unanswered difficult questions that state lawmakers and the governor will have to settle before their June 15 constitutional deadline to pass a balanced budget:

“At the end of the day, does it make sense to move at a breakneck speed to house thousands of people during the emergency phase of the pandemic, and then throw everyone out on the streets when it’s over?”

Here’s what else you need to know about Newsom’s housing and homelessness budget in a pandemic-induced recession.

What was proposed before we talked about “bleach injections“

Before phrases like “social distancing” and “mask hoarding” entered the day-to-day lexicon, Newsom staked much of his political capital on fixing the state’s painfully visible homelessness woes. His January budget included a one-time infusion of $750 million in new state homelessness dollars, the most California had devoted to the issue in recent memory. It also proposed a new system of bypassing local governments to deliver those dollars directly to homeless services providers, along with hundreds of millions to reform the state’s low-income health insurance program to pay for things like housing and addiction services.

Another item Newsom put forward: an additional $500 million in tax credits for low-income housing developers. In his February State of State address, Newsom even flirted with broader ambitions laid forth by his homelessness task force, including ongoing homelessness spending housing providers could rely on every year.

Reforms that would have provided more funding to homeless utilizers of Medi-Cal health services — and tapped more federal dollars in the process — have been put on indefinite hold. Roughly $500 million approved in last year’s budget for things like mixed-income housing developments and new housing near transit was clawed back before it could be tapped by developers and cities scrambling to make projects “pencil out.” And the more ambitious plans, like the new system for delivering state homelessness dollars via “regional coordinators,” or imposing a state mandate to force local governments to make progress on their homeless populations (a plan Newsom never really embraced), have been ditched for now.

The $750 million from the state for more general homelessness funding has been replaced by $750 million from the federal government for a specific purpose: buying some of the 15,000 hotel rooms the state has procured to provide emergency pandemic housing for the unhoused. Right now more than 7,000 of those rooms have been occupied, although the state does not track how many of those occupants are there for temporary quarantines as opposed to longer stays. The clock is ticking on the hotel purchases: The state has to make them by the end of the year or it loses the federal money.

With the federal funding restricted to acquiring and converting hotels to more permanent housing, Newsom is hoping counties and cities can fund homeless services like social workers and counselors with more than a billion in other federal pandemic supports, some homelessness specific and others for general coronavirus response. So far finding available hotels and motels for temporary homeless housing has proved less of a hurdle than staffing the hotels with appropriate health and safety net workers.

Finally, Newsom is keeping the $500 million in tax credits for low-income housing he proposed in January. Perhaps even more auspicious for low-income housing advocates, the vast majority of housing programs aren’t subject to $15 billion in “trigger cuts” Newsom warned would happen if more federal funding for states and local governments did not materialize.

What was conspicuously absent

Newsom’s pandemic-revised budget contains no new plan to help California renters and landlords beset by missed rent payments, a “looming crisis” for the state’s cash-strapped tenants. While the governor wants to push a $330 million windfall from a Great Recession-era lawsuit settlement to mortgage relief and legal aid clinics, that money is prohibited from being spent on rental assistance. Newsom administration officials have touted the rent relief package in House Speaker Nancy Pelosi’s most recent stimulus proposal, which would require signoff by both Senate Republicans and President Donald Trump.

While Newsom’s housing and homelessness budget wasn’t as brutal as some were expecting, Democratic lawmakers and advocacy groups will still be fighting tooth and nail for additional funding they believe is necessary to ensure the governor delivers on pre-pandemic rhetoric.

At the top of the homelessness debate will be requests for billions in ongoing funds — money local governments and service providers can bank on every year to build shelters, operate converted motel rooms, and build permanent housing. Santiago’s proposal for $2 billion a year in new state homelessness funding does not identify a new revenue source (read: tax increase), meaning lawmakers would have to find $2 billion in cuts elsewhere. Another proposal from Sen. Jim Beall, Democrat from San Jose, similarly proposes roughly $2 billion per year for the next four years for homelessness and low-income housing development without specifying a new source of dollars.

Assemblyman David Chiu, Democrat from San Francisco, hopes his plan to eliminate the mortgage interest deduction on vacation homes to raise hundreds of millions in homelessness dollars will finally get through. His proposal has failed in past years.

“In this crisis we should be addressing the suffering on our streets rather than the tax breaks of the wealthy few who have vacation homes,” said Chiu.

Beyond the tug-of-war on homelessness dollars, lawmakers and Newsom will have to decide whether the state can afford a major rent forgiveness program, and if so how it should be structured.

State Senate Democratic leaders unveiled a plan they estimate would cost $300 million to $500 million per year that would allow renters to pay back missed rents over the course of decade, while compensating landlords with transferable tax credits. A separate landlord supported proposal would create a state program that would pay for 80% of missed rent payments.