By Kristen Hwang for CalMatters 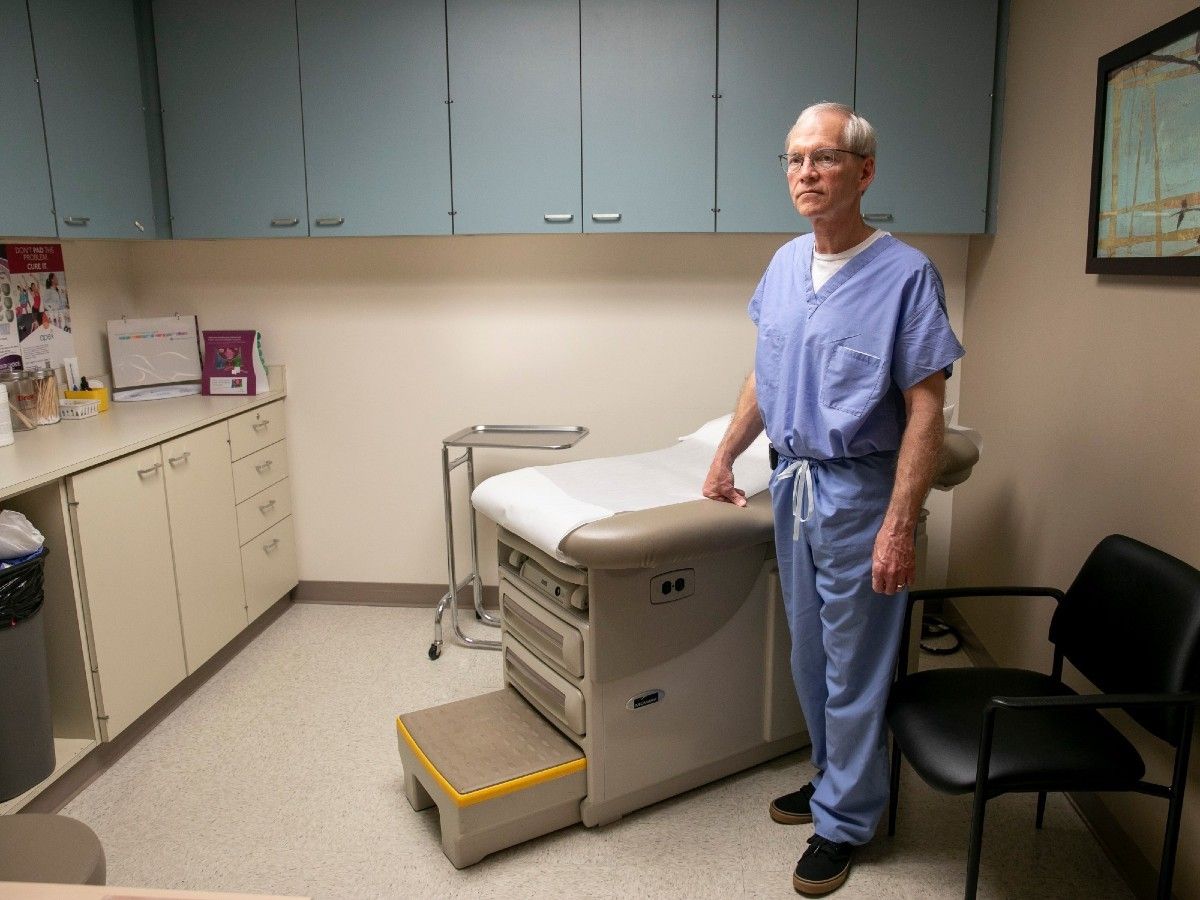 In a matter of weeks, Dr. William Goral, a private practice ear, nose and throat specialist in San Bernardino County, will be out of business.

His small, solo clinic, which has served patients throughout the Inland Empire for 30 years, postponed about 80% of patient visits due to coronavirus restrictions. That’s not enough revenue to pay rent, utilities or staff.

“We are going into the red even having laid off two-thirds of my employees,” Goral said.

At private practices and small clinics across the state, independent physicians are worried their businesses won’t survive the current crisis, forcing them to either close their doors or sell their practices, which could lead to higher patient costs. In either case, experts worry that will leave the health care system vastly diminished at a time when the state is facing skyrocketing costs and a shortage of doctors.

(Image: Dr. George Scott in one of several examination rooms in his Manteca clinic. Scott’s private OB/GYN practice is moving to a smaller clinic space in the midst of the coronavirus pandemic due to a rent increase. Photo by Anne Wernikoff for CalMatters)

About one in three Californians get care from private practice physicians and specialists, according to the California Medical Association, which represents roughly 50,000 doctors across the state. In a recent survey, nearly 76% of members reported being extremely worried or very worried about finances.

Empty clinics triggered a cash crunch for doctors after Gov. Gavin Newsom issued a shelter-in-place order last month. That’s because the statewide lockdown forced a majority of medical procedures, from hip replacements to annual check ups, to be canceled or delayed unless they are deemed an emergency.

A catastrophe for private practices

On Wednesday, the governor announced plans to resume some delayed medical care such as heart valve replacements, angioplasty and and tumor removals, but he warned the state remains far from reopening.

And though the federal government is providing aid, most say it’s not nearly enough.

“The whole situation is catastrophic for the entire profession in terms of economics,” said Dr. Thomas LaGrelius, a family medicine doctor in Torrance, Calif. and president of the American College of Private Physicians.

LaGrelius currently is only able to conduct about three in-person patient consults per day and has tried to switch as many appointments as possible to online video conferences. Unlike other doctors who received emergency grants this week from the U.S. Department of Health and Human Services, LaGrelius’ clinic has yet to get any relief from the federal Coronavirus Aid, Relief and Economic Security Act, or CARES Act.

The federal department, which is doling out $100 billion to doctors based on the amount of patients they serve who are on Medicare, gave him a test deposit of $0 and told him a grant would come later.

And while grants are certainly welcome, they’re a “drop in the bucket,” said Debbie Rood, business manager for her husband’s obstetrics and gynecology practice in Manteca. Rood’s husband Dr. George Scott said they received about $2,000 since most women over the age of 65 don’t see a gynecologist regularly.

His private practice’s finances are complicated by the fact that insurance companies won’t reimburse him until after patients give birth, leaving him and his staff performing unpaid labor for months. At the same time, their rent tripled, forcing them to downsize to a smaller clinic.

Taking out a second mortgage

Scott and Rood are determined to keep the business running but they may need to take a second mortgage on their home. They are also concerned about the long-term implications the economic crisis will have on access to care.

“If you lose all of your primary care doctors and your (obstetricians) because you can’t make a living,” Rood said, “where are patients going to go?”

It’s a question with a complicated answer, said James Robinson, professor of health economics at UC Berkeley. The economic fallout of the pandemic will lead to the closure of many private practices, but the implications are less clear. 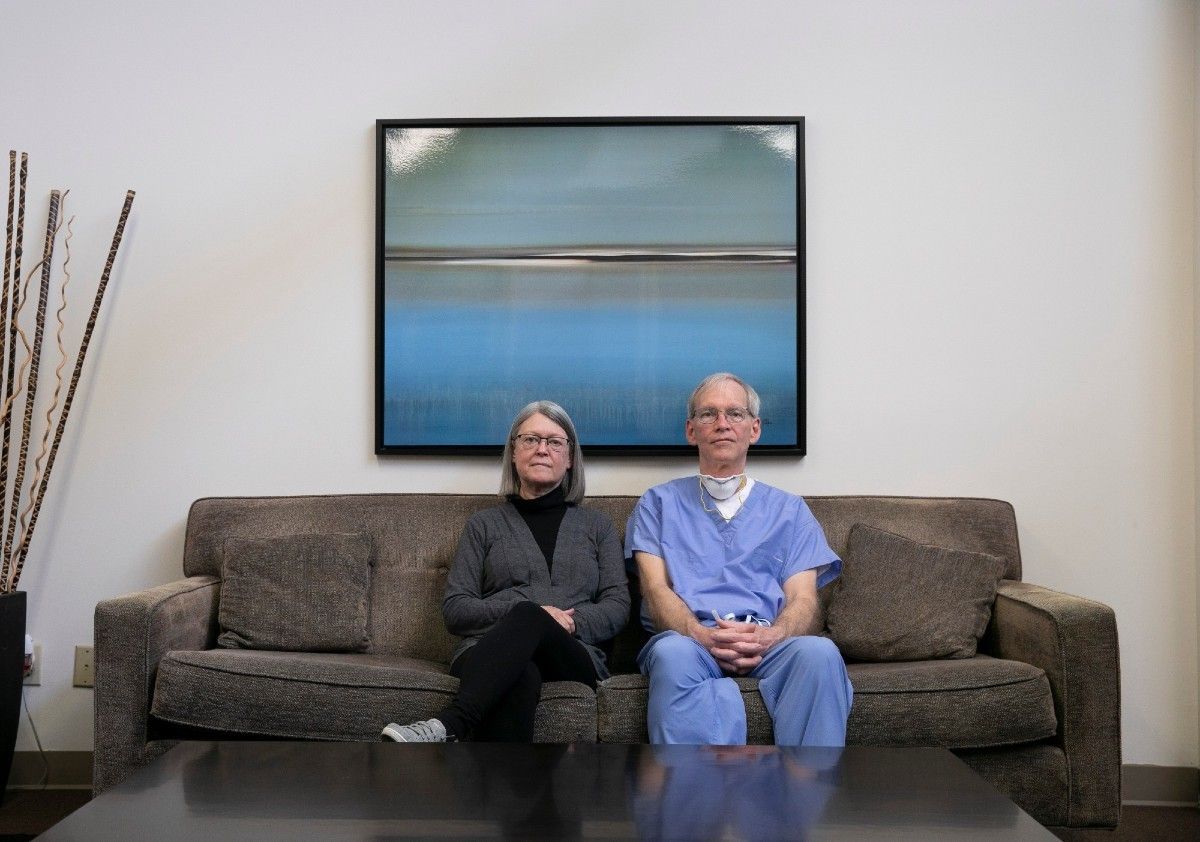 Increasingly, in the past decade, independent doctors and private community hospitals have been swallowed by sprawling health care delivery systems through mergers and buyouts. Nearly 60% of Californians received care from an integrated healthcare system in 2018, which organizes doctors, hospitals, and sometimes insurance companies into one coordinated system, according to Let’s Get Healthy California, a state task force that monitors key health indicators including access to care.

Because small businesses like independent physicians typically don’t have the financial reserves to ride out severe economic downturns, the current pandemic will hasten the consolidation of healthcare, Robinson said.

“I think that it’s going to drive them into the arms of health plan places like Kaiser,” Robinson said.

The loss of private practices isn’t necessarily a bad thing, experts say. Consolidated health care can lead to better communication between doctors, more efficient use of testing and scans, and more cost-effective treatment, he added.

(Image: Debbie Rood and Dr. George Scott in their Manteca clinic. Rood says making sure Scott stays healthy during the coronavirus pandemic is a priority. Photo by Anne Wernikoff for CalMatters)

The problem is many of California’s rural counties, which often face provider shortages to begin with, still rely on private physicians and community health clinics. Forty of the state’s 58 counties had below-average access to consolidated health care in 2018, with as little as 10% of the population in Del Norte enrolled in a managed health care plan.

A large body of evidence shows that hospital mergers and physician buyouts have increased insurance prices throughout the state.

In areas with high hospital consolidation and high proportions of hospital-owned physician practices, health insurance premiums cost up to 12% more than in areas with average levels of consolidation, according to research published in Health Affairs, a peer-reviewed health policy journal.

“There was an uptick in merger activity right after 2008,” said Daniel Arnold, co-author of the paper and research director at the Nicholas C. Petris Center on Health Care Markets and Consumer Welfare at UC Berkeley. “I think you will see something similar here.”

Rood said she’s scared to death of what will happen to patients should her husband, Scott, become ill from coronavirus or should their private practice be forced out of business. Already, with only five obstetricians and gynecologists in their area and one planning to leave in June, Scott said there aren’t enough OB-GYNs to take emergency calls at the local hospital.

Like many other doctors and business owners, Rood and Scott applied to the Small Business Administration’s Paycheck Protection Program, a $350 billion emergency fund created by Congress to avert business closures and layoffs during the COVID-19 pandemic.

Their bank, however, took 11 days to send the application to the first-come, first-serve relief program. The day after they submitted, the Small Business Administration announced it had run out of money.

Now, with Congress approving a second $484-billion relief package with $75 billion set aside for physicians and hospitals, independent physicians like Scott and Goral are hoping to save their life’s work.

Goral, the ear, nose and throat specialist, was unsuccessful in obtaining help in the first round of federal funding, but he hopes the second round of funding will buy time until patients return. Still, his position is precarious. Each passing day pushes his business further into debt and he fears he’ll close before ever seeing any money.

“If we have to shut our doors and we don’t have a practice anymore, then the opportunity has been missed,” Goral said.