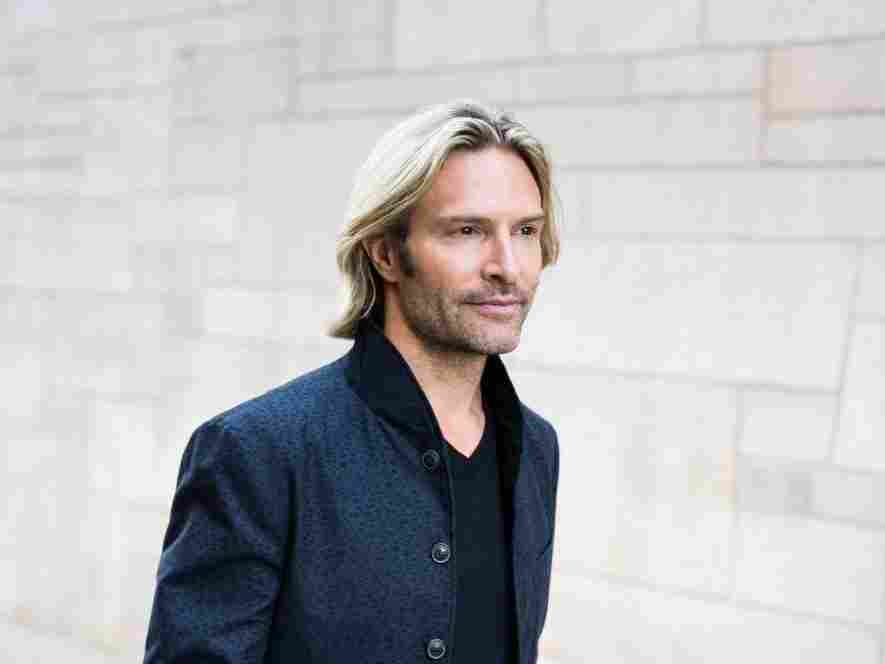 Marc Royce/Courtesy of the artist

Here's a surprising statistic: According to a survey by Chorus America, one in six Americans, or 54 million people, sing in choral groups, whether that's community, school and children's choirs, religious groups or professional ensembles. But since stay-at-home orders have been issued across many states, choral music here and around the world has completely stopped. It turns out singing is a perfect way to spread coronavirus. So, what's a choral singer to do? Well, one could join a virtual choir, and that's what over 17,000 people did.

Ten years ago, a teenage fan recorded herself singing the soprano line from one of Eric Whitacre's choral pieces and posted it on YouTube. And it gave composer-conductor Whitacre an idea: What if he could get several singers to record themselves in their rooms, doing one of his pieces in the same tempo and key, then stitch the videos together and make a virtual choir?

"We tried it and it worked!" he says. "We had this little virtual choir, 185 singers from 12 countries. I never thought it would go further than my little group of choir geeks, and it went viral."

How Do You Make A Virtual Choir?

More virtual choirs followed, each getting exponentially larger. Now of course, the word "viral" has more connotations, and when Whitacre put out the call to join his latest project, the response was overwhelming.

"This virtual choir, Virtual Choir 6, has 17,562 different singers from 129 countries," he says. "When I look at the numbers and, more so when I look at the faces of the people from around the world, I'm just stunned."

Wei Jiang, a professional choral singer and hematologist based in Sydney, Australia, says that Virtual Choir 6 has "a special and a very different meaning because of the state the world is in."

She's been part of every Eric Whitacre virtual choir since the beginning, but says, right now, she misses being in a room with other singers.

"You somehow need to learn how to breathe together, how to listen to each other, how to blend with each other and how to communicate as a collective," Jiang says. "I think there's nothing else in my life that's quite like that experience, and that's why I sing choral music."

Those are the kinds of lessons Danielle Koplinka-Loehr teaches her middle school choruses in Culver City, Calif.

With school closed, her students couldn't sing together, so Koplinka-Loehr gave them the assignment to participate in Whitacre's virtual choir. She says it was a real challenge for her students to sing along to a guide track alone in their rooms.

"When you're making your own video, you're very exposed. And I think that a lot of students are understandably a little nervous and anxious about that," Koplinka-Loehr says.

Singing a choral piece alone is not just weird for middle schoolers, it's challenging for everybody. Ashley Ballou-Bonnema, a professional singer from Sioux Falls, S.D., who has Cystic fibrosis, created her own virtual choir for people with the disease.

"It's so vulnerable," she says. "And everybody hates listening to their own voice. When you're in a choir, you realize that, OK, I'm not alone in this. I'm melding myself a part of something."

Over the years, a community has developed on Facebook around Whitacre's virtual choirs, where people share their trials, tribulations and tips. Marc Lodge, an IT specialist who lives in Kent, England, says he's met many people from the Facebook page in real life. But, now, he says: "It's a very hard time for the world, and the only way that we can come together is virtually."

When Eric Whitacre did his first virtual choir, it was an intriguing curiosity, but right now, it feels like an essential lifeline.

"There's something about joining voices, both metaphorically and literally, that makes us better people, better citizens, more empathetic, more compassionate," Whitacre says. "And ultimately, I think that singing is so popular and feels like a thing that we must do, because we feel part of something larger than ourselves."