the singer-songwriter has returned with the confident, sunny single, "Solar Power." Accompanied by a music video Lorde co-directed with Joel Kefali — in which she appears centered in bright yellow, surrounded by acolytes dressed in earth tones, scattered on a beach — it's the first single from what she confirmed today in a newsletter to fans will be her new album, also called Solar Power.

The song inadvertently made its way onto streaming services ahead of schedule earlier today, but was pulled and posted on official platforms this evening. While a release date for the record has yet to be announced, the title track includes familiar collaborators — Jack Antonoff co-writes and co-produces — along with a pair of backing vocalists — Phoebe Bridgers and Clairo — whose careers have taken flight since Lorde released her last album in 2017.

In place of Melodrama's reckless, love-drunk, city escapism, "Solar Power" celebrates sand, saltwater and "a new state of mind." For listeners tuning in during the waning days of the Covid-19 pandemic, Lorde seems to be writing to us from New Zealand's January summer, the host of a gathering that feels either years behind — or ahead — of the gloomy lockdown we've been living through. Swept by the track's skittish guitar and Lorde's nimble voice speaking glowing affirmations, it's difficult not to follow along when she murmurs, "Are you coming, my baby?"

Browse around our site and you'll see a few ways you can join in the effort to make KRCB 104.9 a great community radio station for Sonoma County. You can record a message that we play on-air, give us some new ideas, and keep abreast of what we're doing. New ways to engage with us our coming soon.
But there's an old fashioned one that's really important to us: become a member! We're making a big commitment to serving Sonoma County better, and while we really do want you to listen, and participate, helping pay for all of this would be really helpful too! Any amount helps, and we've got lots of cool gifts including some great CDs curated by our DJ Doug Jayne.
Please click: www.krcb.org/join   Thank you!

“Sonoma County Baby” began in 2013 as a way to connect new Sonoma County mothers with the history of the county. In cooperation with Sutter Health, a nice book was published that featured the stories of several dozen Sonoma County families, describing how they each came to Sonoma County. The book was given to new moms. The project’s website is here: http://sonomacountybaby.com/.
Now, we want to put stories like this on KRCB-FM, Sonoma County’s NPR station. How and when did your family come to Sonoma County? Does your story include some old Sonoma County landmarks that some of us might remember? What was interesting about it? Finding the interesting part is important! These recording are all short, less than a minute or under 100 words. That’s not enough time to tell the whole story—just the highlights. Here's a sample script that’s about the right length. Click "Read More" to hear what others have submitted.
Read More
Read More
Be on KRCB 104.9...answer this month's "Talk to Me" question: What does Sonoma County need that it doesn't already have?
You can do a recording right from your computer or smartphone, but please use an external microphone (ear buds are good enough). Don't worry, you can try as many times you like until you get a "good take." We won’t hear any of the bad ones. After you finish, the page will give you a chance to listen and decide if you like it. Once you get a good one, you'll be asked for your name and email address. Then hit "Send.” (Click "reset" if you would rather try again.)
Go to the recorder page
Each week, Santa Rosa-based travel writer Dana Rebmann introduces us to great local spots to visit. Listen on-air for the latest. Or click here:
Crane Creek Regional Park
Marijke's Sculpture Grove
Read More 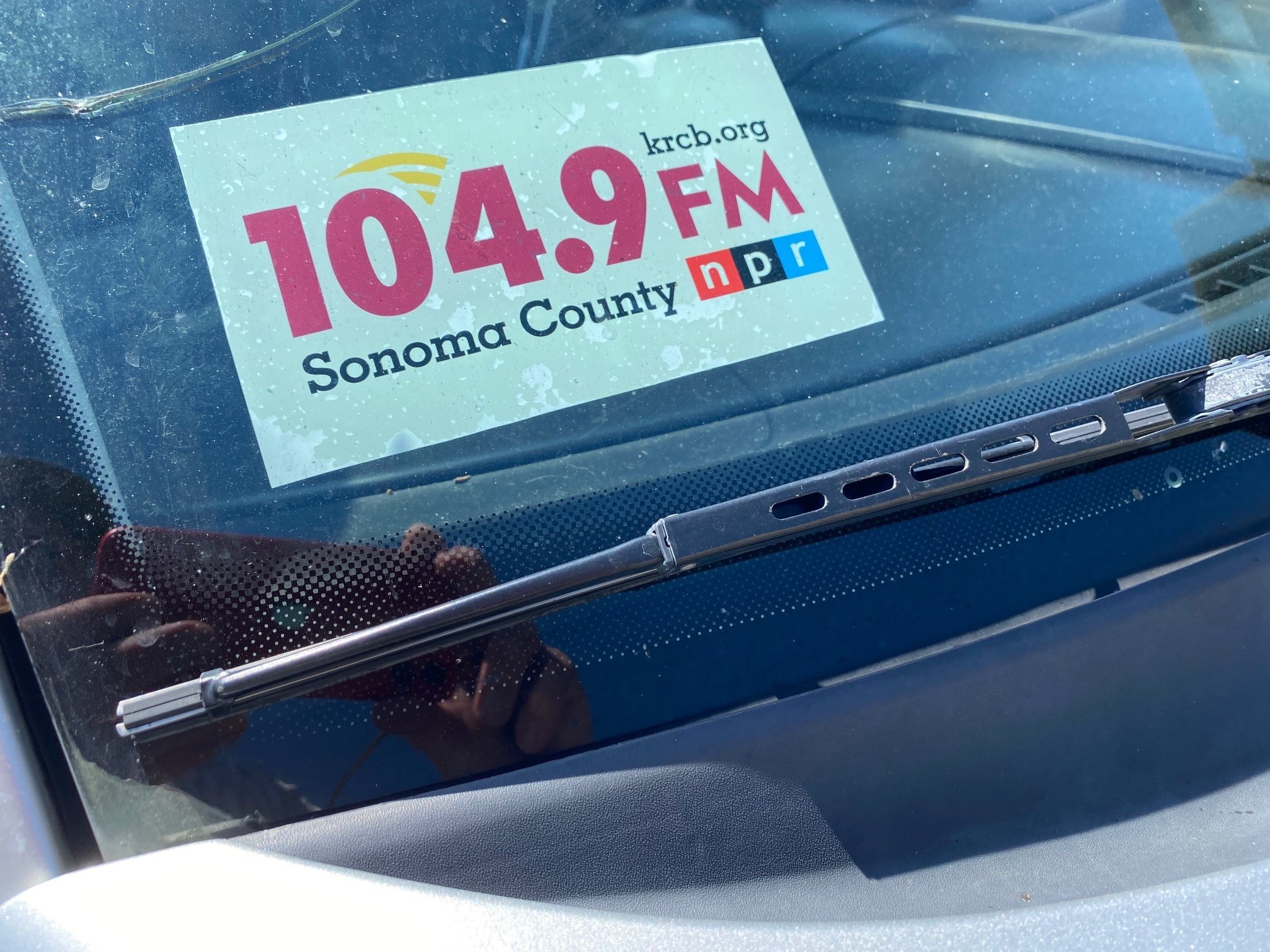 Get Your Free KRCB 104.9 Window Sticker
Get yours today at these friends of KRCB:
-Stanroy Music, Santa Rosa
-The Next Record Store, Santa Rosa
-All 10 SoCo Mary's Pizzas
-Acre Coffee (SR, Petaluma, Sebastopol)
-Wolf House Brewing, Cloverdale
They might look like bumper stickers, but they're meant to stick to the inside surface of glass.