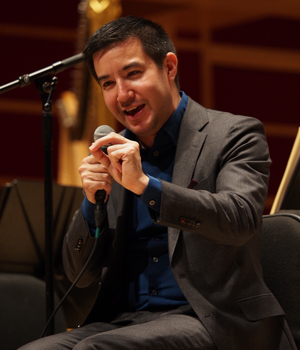 The Santa Rosa Symphony's new music director and conductor, Francesco Lecce-Chong, will lead his first full season beginning this fall. This is the first time he will be able to put his stamp on the orchestra, with a repertoire that reflects his own tastes and vision for the group.

Among the new initiatives this year, he's embarking on an ambitious commissioning project with the Eugene Symphony Orchestra, which he also leads.

KRCB news director Steve Mencher spoke with Lecce-Chong during a rehearsal at the Green Music Center earlier this year, to learn more about his background and his hopes for the symphony.

In the second part of this interview, Steve Mencher talked with Lecce-Chong about how the symphony will change under his leadership.

The Santa Rosa Symphony is playing a free community concert on July 28 at the Green Music Center. Although hall and table seating is sold out, lawn seating will continue to be available up until the show starts at 7 pm.