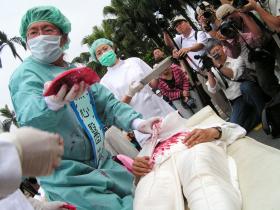 Enzo Guo fled his native China and sought asylum in the United States, because he knew he was at risk of being imprisoned for practicing Falun Gong.

He’s since learned that he may have escaped an even more grisly fate.

Within the opaque society of China, it’s hard to confirm the widespread  allegations of organ trafficking, but expat Fauln Gong practitioner Enzo Guo says the circumstantial evidence is substantial.

The most substantive investigation of Chinese organ trafficking was the Canadian Kilgour–Matas report, released in 2007. The Chinese government's ongoing suppression of Falun Gong is tracked by the international Falun Dafa website.