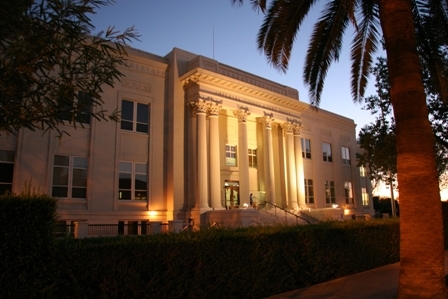 Imperial County, the rural county in southeastern California beset with overrun hospitals and the highest COVID-19 mortality rate in the state, has allowed landlords to pursue court-ordered evictions during the novel coronavirus pandemic — despite state judicial rules barring such proceedings.

The Imperial County Superior Court has issued notices of eviction lawsuits to renters and engaged in other eviction proceedings that violate state judicial protocols, according to documents reviewed by CalMatters. The documents were provided by the Imperial County chapter of California Rural Legal Assistance Inc, a statewide legal aid organization.

The state Judicial Council — the governing body for the state court system chaired by state Supreme Court Chief Justice Tani G. Cantil-Sakauye — issued an emergency rule on April 6 barring local courts from going forward with most eviction cases, with the exception of cases involving threats to public health and safety. The council then extended the ban.

“People being evicted from their homes is a public health and safety problem,” said Adriane Bracciale, directing attorney for the legal aid organization’s office in El Centro, the county seat. “That’s why this emergency rule was instituted so that people aren’t being kicked out of their homes during a contagious, deadly pandemic.”

Bracciale said she discovered the issue when three separate renter households approached her legal aid clinic in the past few weeks with eviction “summonses” — orders for a renter to either challenge an eviction lawsuit in court or lose an eviction case by default. The first client who approached her office was being evicted for not paying rent after the pandemic hit, and claimed they couldn’t afford rent because of COVID-related financial hardship.

While the three eviction cases were ultimately rescinded once court officers were informed of the mistake, it is unclear how many other evictions may have proceeded in Imperial County in violation of the state Judicial Council rules.

Before the pandemic emergency rules, landlords could file eviction lawsuits against renters in local civil courts. The civil courts would in turn send a summons to the renter notifying them of the lawsuit. The summons required a response within five days. If the renter did not respond in those five days, the court would enter a default judgment in favor of the landlord and the renter would be ordered to leave. If a renter lost an eviction case, the courts would issue an order a landlord could take to the local sheriff’s department to physically enforce the eviction.

The April 6 order should have stopped that process entirely, at least for the time being.

Many renters do not seek legal counsel when faced with eviction lawsuits. Other renters confronting legal eviction documents may simply decide to vacate, unaware of new protections afforded during the pandemic.

“I don’t know if residents are aware that evictions should not be happening during the state of emergency as it’s explained under the emergency rule,” said Bracciale.

Imperial County Superior Court Presiding Judge L. Brooks Anderholt did not return multiple requests for comment. Other court employees declined to answer questions on how many default judgments against renters the court may have mistakenly allowed, or how the evictions could have proceeded in light of the Judicial Council rule.

Arimai Heredia, who oversees eviction lockouts for the Imperial County Sheriff’s Department, says deputies carried out two evictions in the past two weeks but could not say whether those evictions were processed by the court in violation of state rules. Eviction lockouts in cases already resolved by the courts by April 6 — prior to the judicial order — are still allowed, as are evictions in cases involving threats to public health and safety.

Citing the health risks of removing renters during the pandemic, some sheriff’s departments in other parts of the state have stopped “enforcing writs” — legalese for performing evictions — even in cases not barred by the Judicial Council emergency rule.

“It’s not up to us to question,” said Heredia. “We don’t have any documents to go by and determine, that would be the court. If the court issues the writs, then we’ll enforce it.”

Heredia said to her knowledge the two lockouts performed in the past two weeks were the only evictions carried out by the Imperial County Sheriff’s Departments since April. However, renters who receive eviction notices do not necessarily end up on a sheriff department’s lockout docket.

In a letter addressed to Judge Anderholdt, Bracciale details that court officers told her in early July that no information about the Judicial Council’s eviction moratorium had been relayed to Imperial County Superior Court clerks who manage eviction proceedings, and that court employees had not received instructions to stop issuing court summonses in eviction cases.

The letter details that court officers, once notified of the emergency ban on eviction proceedings by Bracciale, told her they would work on a plan to adopt the rules going forward.

Bracciale also filed the letter with the state Judicial Council, but has not yet received an answer.

Responding to questions from CalMatters, Judicial Council spokesperson Cathal Conneely wrote via email, “As the recipient of this letter, the Imperial County Superior Court, an independent constitutional entity, is best positioned to respond to any allegations.”

Imperial County, where one in four residents live below the poverty line, has been ravaged by the novel coronavirus. In late June, Newsom urged local elected officials to reinstate stay-at-home orders because of the severity of the outbreak. Only two intensive care unit beds are available in the county as of Tuesday, according to a Los Angeles Times tracker, and patients are being airlifted to hospitals in nearby San Diego and elsewhere in Southern California.

The Newsom administration did not respond to requests for comment on this story.