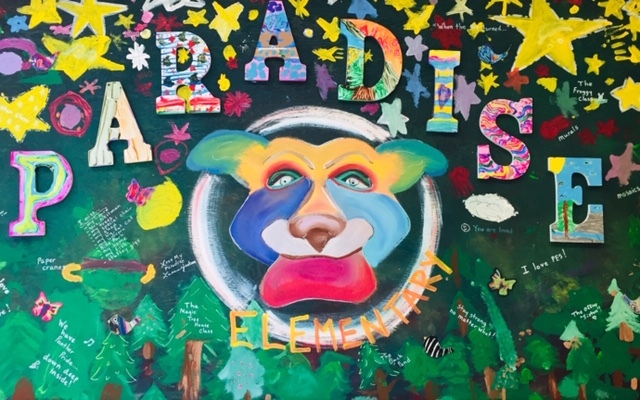 Clinical social worker Laura Besser points to a mural outside the administration office at the new Paradise Elementary School. The students were relocated to this campus, which used to be the middle school, after their elementary school burned down in the Camp Fire. In the center of the mural is the school mascot, the tiger, colored-in with neon shades. Around the tiger, students have drawn pine trees and stars. They’ve also written down lists of what they lost in the Camp Fire. One paragraph reads, “ I miss my lizard, my big fat cat, my home”

“I never imagined that in one day, my whole caseload would have such severe trauma due to a natural disaster,” Besser said.

Besser has been counseling students in the Paradise Unified School District for about ten years. She works for a non-profit called Youth for Change, which sends counselors into schools to help students in need. She says her job has changed dramatically since the fire.

“Before we were working with kids that had depression or generalized anxiety, and a few might have trauma or complex trauma. But after the Camp Fire, the majority of my caseload had trauma, intense complex trauma,” she said.

For Besser, the changes in the students are obvious, especially in relation to somatic symptoms ⁠— emotional strains that are reflected in the body.

“Kid’s that I was seeing before who didn’t have behavioral issues or somatic issues, all of a sudden they have it,” she said. “Like intense tummy aches, they are wetting the bed, they are having nightmares, and so it really intensified my work.”

Health Care providers use the term Adverse Childhood Experiences, or ACES to describe traumatic events. Research shows that the greater the number of adverse experiences one has during childhood, the more likely they are to experience health problems later in life.

Before the Camp Fire, Butte County residents experienced more traumatic childhood events on average than residents of any other county in the state. That’s according to a report by the San Francisco based non-profit, the Center for Youth Wellness. According to the organization, 76 percent of Butte County residents reported having more than one adverse childhood experience. High rates of poverty may account for these numbers. Mandy Kling, also a clinical social worker with Youth for Change, has noticed instability and poverty have made it harder for kids to recover from the Camp Fire.

"In working with kids that are still living in trailers since the fire, it's like a perpetual state of crisis, she said. “They haven’t been able to get out of crisis mode and get a sense of safety and stability, and in doing so they tend to be more escalated and tend to be more hyper-vigilant. The behaviors have still maintained, I haven’t seen a reduction in behaviors without that stability. “

Kling grew up in Paradise, the Camp Fire destroyed the home where she was raised. She believes that if the community had more resources and support before the fire, things could have been easier.

“Prior to the fire, it is my perspective that it was under-resourced and there was a higher need for therapeutic services that wasn’t met,” she said.  “Following the fires, there was a lot of chaos and everybody was traumatized. The people who are trying to pick up the pieces have gone through hell and back.”

Kling hopes that other communities will learn from what Paradise has been through and build the support networks they need before a disaster happens.